Digitalisation is the future of the power sector

The event commenced with a plenary session presenting the results of the World Energy Monitor, a measure that assesses global energy agenda in various regions. In Asia, for instance, results showed that the issues of highest impact include digitisation, economic growth, electricity storage, and the Chinese growth. In Latin America, the issues included the US policy, regional integration, and commodity prices. In the Middle East, the monitor showed issues such as talents acquisition, energy efficiency, and energy subsidies as the main issues of high impact and high uncertainty. The monitor also shows a global consensus that energy efficiency, and digitization as important issues that keep energy leaders awake at night.

Furthermore, Future Energy Leaders held their annual summit in which they discussed work progress of various task forces on issues including achieving climate targets, digitisation, and energy transition. The synergy between innovation, regulations, and policies was discussed as an important approach to achieve climate targets. It was also emphasised that the FEL vision designed to tackle grand transition challenges is based on three main pillars; leadership; flexible business models; and human capital. 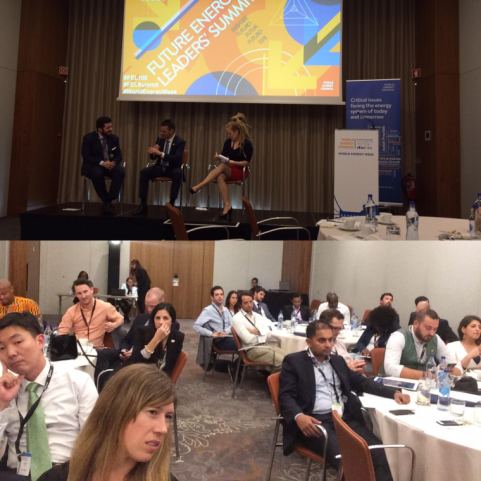 The Energy Trilemma discussed many important energy issues including climate change, the new natural gas market dynamics, and role of blockchain technology in transforming the electricity markets. Diversification of energy supplies, enhancing consumption efficiency, the and circular economy were highlighted as important strategies to enhance resilience to climate change. In addition, the need to understand the new dynamics of the gas market in terms of new supply projects and logistics while maintaining investments and infrastructure to facilitate the market. This includes the need to establish new effective methods to create access to natural gas as a more competitive more reliable source of energy. There was also a clear consensus on the impact of blockchain on the electricity market by allowing more transparent energy transactions which support energy decentralisation and democratisation.

The WELS event focused on the role of digitalisation in the energy sector. As energy is the most capital-intensive business, digitalisation can be an important tool to reduce costs and improve services. Furthermore, the increased decentralisation of the energy sector by, for instance, solar PV, makes digitalisation more important in achieving the energy transition. A case study was presented from the Estonian Energy Minister showing that Estonia achieved a 100% smart metering country and 96% of invoicing over e-channels with agreements signed over internet/mobiles. The average cost for providing electricity went down to 3 EUR/Person, with digitalisation compared with 20-25 EUR/Person. In addition, energy consumption was hugely reduced which raised efficiency and customer satisfaction. Customers can also make use of interactive maps to easily locate any points of errors with the electricity providers. It was highlighted that for every 1 EUR invested in digitalisation 3 EUR can be returned in 5 years.

The average cost for providing electricity went down to EUR 3/Person, with digitalisation compared with EUR20-25/Person

In the era of digital companies, the power generation sector should look at business models that democratise energy supplies and accommodate the demand for electric mobility. New business models could emerge especially from in India where decentralized systems or micro-grids are needed to power villages.

Energy leaders also highlighted the emergence of a new type of a customer relationship by 2030 in which customers pay for the service, not for KW. This would enable establishing a digital service business that includes energy as a component which enables customers to pay less, and in which Artificial Intelligence will play a key part. The winners will be those who adopt new business models, as competition will be based on competitive service providers.

The issue of cities and urbanisation was also highlighted as a major challenge in the transformation to meet the digital revolution. High baseload energy sources such as nuclear energy as well as access to reliable data will be crucial for cities planning for transformation.

The executive assembly also discussed regional issues, budget governance, and strategies to better engage stakeholders. The next WEC Executive Assembly will take place in Milan in 2018.

Dr. Yousef Alshammari is a research scientist specialising in energy systems transition and its relation to energy prices. He obtained his PhD from Imperial College London, and he was honoured as a Young Global Changer at the G20 Global Solutions in Germany in 2017. View all posts by Yousef Alshammari